It’s no wonder that the silent e vowel pattern can be prickly to learn. Just as your students are feeling confident decoding consonant-vowel-consonant short vowel words, you decide it’s time to throw a new outlandish idea at them.

Wait… you’re telling them that vowels can stand for more than one sound and not all words have the CVC pattern. Yikes! 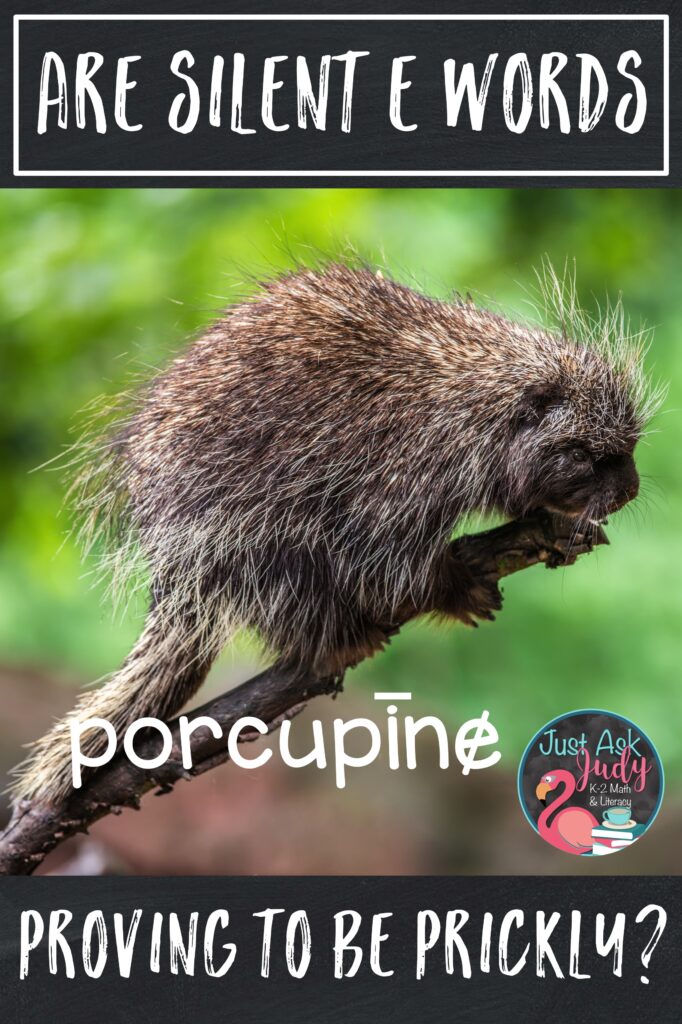 So just how reliable is the vowel-consonant-e pattern? Actually, it depends on the vowel. For a-e, i-e, and u-e the first vowel stands for the long sound for roughly 75% of the words studied. For o-e it is less than 60% and e-e less than 20%. If you’re interested, read the specifics in this article (Francine Johnston, 2001).

During the latter part of my teaching career, I focused on teaching my students to visually recognize vowel patterns in words. I don’t believe that letters make sounds or in one letter making another letter do something. (Listen carefully to that letter a. Now, what do you hear?) Instead, letters stand for or represent sounds.

But I never considered applying the same logic about the final letter e being silent! Here’s a thought-provoking entry (OnTrack Reading) about that idea which also discusses teaching the vowel-consonant-e pattern as a split vowel digraph.

I know you stopped by looking for practical resources. So whether you teach these words as magic e, silent e, vowel-consonant-e, or a split vowel digraph, here are a few ideas and resources (including some freebies) to help you out!

Introduce the vowel pattern and vowel sounds with this free set of letter/ sound picture cards. They are also perfect for daily practice in kindergarten, first, or second grade.

There are two sets of cards. One set has color key word pictures while the other has black and white. These cards are sized for instruction with small groups or individuals.

Print on cardstock and laminate for durability. Then, cut into cards and you’re ready to go. 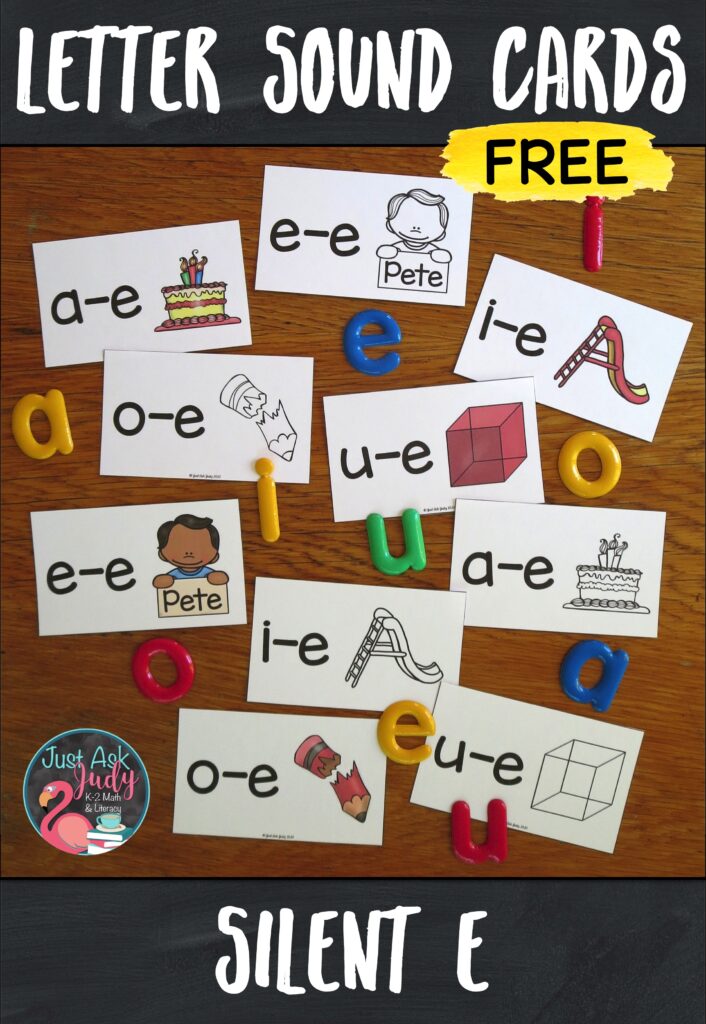 Introduce or practice each letter/ sound picture card by naming the letters, naming the picture, and saying the sound (a-consonant-e, cake, ā). Some children may need to include an extra step and say the rhyming part (-ake) to hear the isolated vowel sound.

Be sure your students know what consonants are! Most likely they can identify vowels but may not know a “label” for all the other letters.

Try a letter-sound mat to contrast the difference between VC and VCe patterns. Use this activity with an individual or small group of students.

Select pairs of VC and VCe words such as cap and cape, din and dine, and rob and robe. Start with the first vowel in the word. Code the letters with the V (vowel), C (consonant), and e (silent e) cards to highlight the difference. Apply the corresponding vowel sounds to decode the words.

Begin by modeling the process. Then, let your students take over the coding. 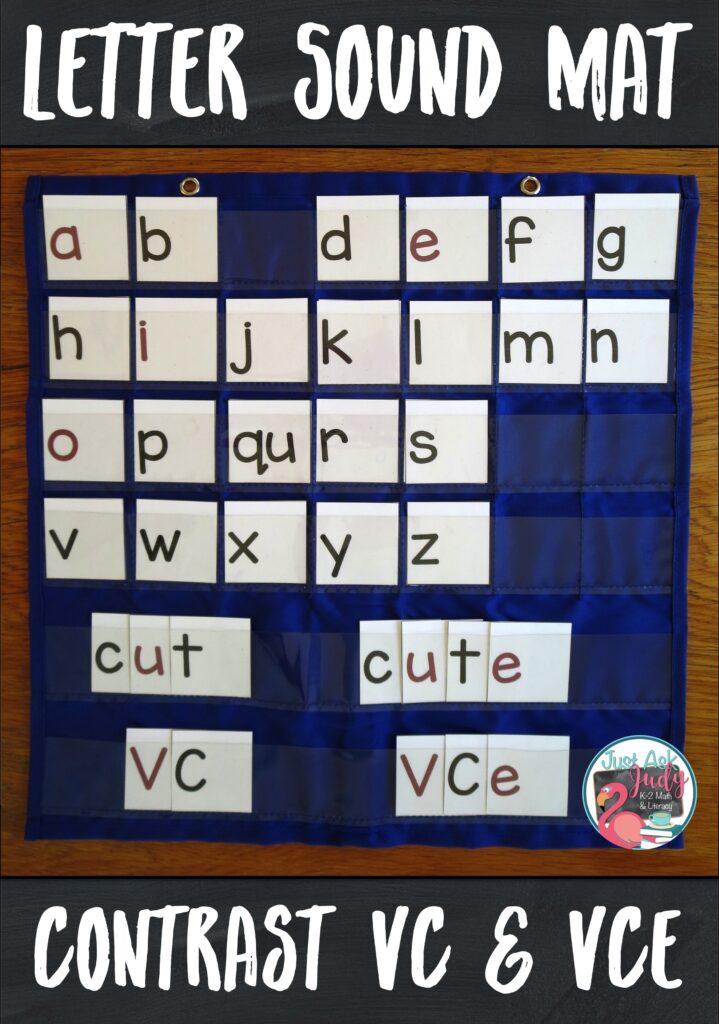 You can also complete this same activity by writing the words on a whiteboard.

You can present this as an introductory activity, save it for later, or do both.

Find more information about letter-sound mats in these two posts; How to Get Started With Teaching CVC Words, and How to Address the Challenge of Consonant Digraphs.

Click the highlighted words to download a recently updated set of free letter cards to use with a letter-sound mat.

I created these easy to prepare word lists to support your beginning or struggling readers as they learn to decode words with the vowel-consonant-e pattern. Each list has three or four silent e words with the same first vowel. The vowels have diacritical marks to show the first one represents the long vowel sound and the e is silent. 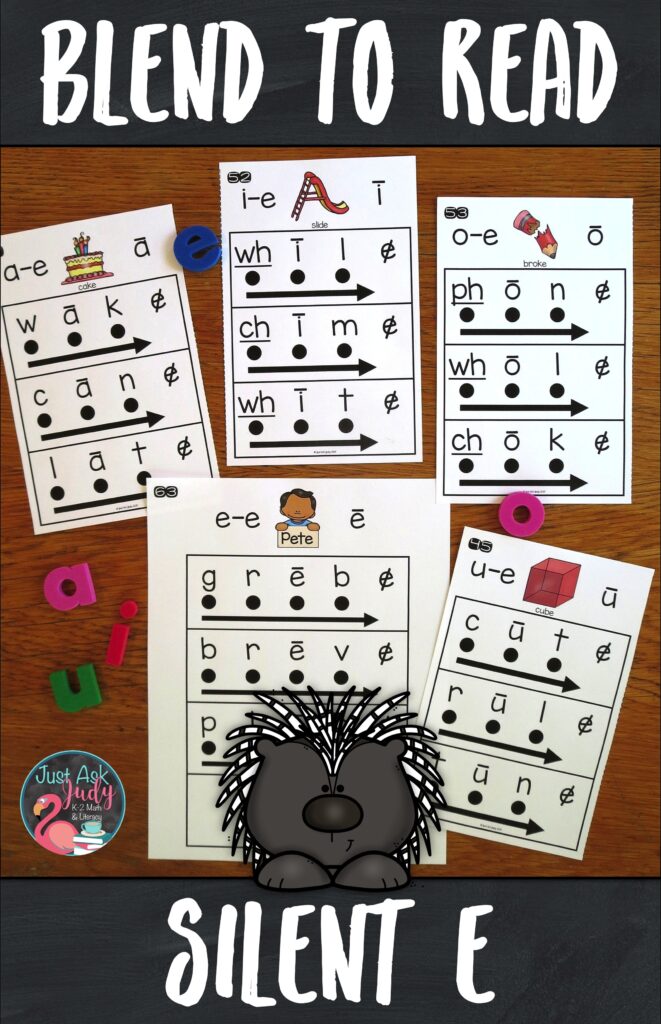 There is a key word picture representing the vowel pattern and sound at the top of each word list to assist your students with letter-sound correspondence.

There is a dot below each letter (or digraph), except for the silent e. Students touch each dot and say the sound that the letter or letters represent(s). Then, they blend the sounds together to read the word as they sweep their finger along the arrow. 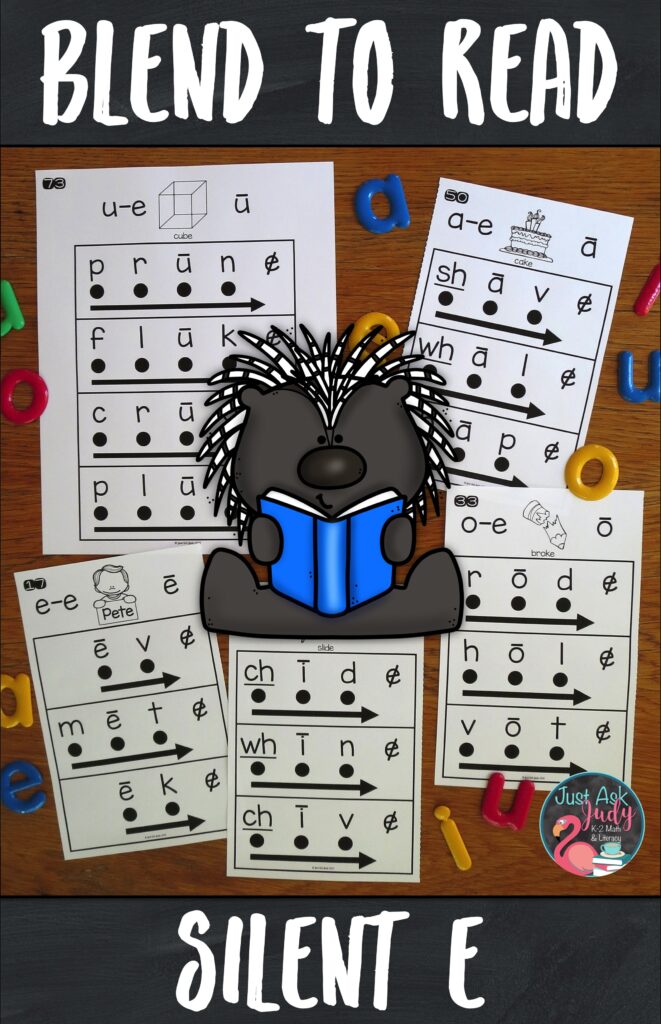 Try these word lists as part of your direct phonics instruction, in your small guided, intervention, and resource groups. After some in-class practice, you could even send them home. The Blend to Read Silent e Word Lists are available for purchase in my TpT store.

Let your students practice their decoding skills with this free game-like activity. It’s a fun and effective way to increase their speed and fluency.

This is a great activity to use in your small groups, in a literacy center, or with an assistant or volunteer. Consider sending it home or leaving it for a sub. 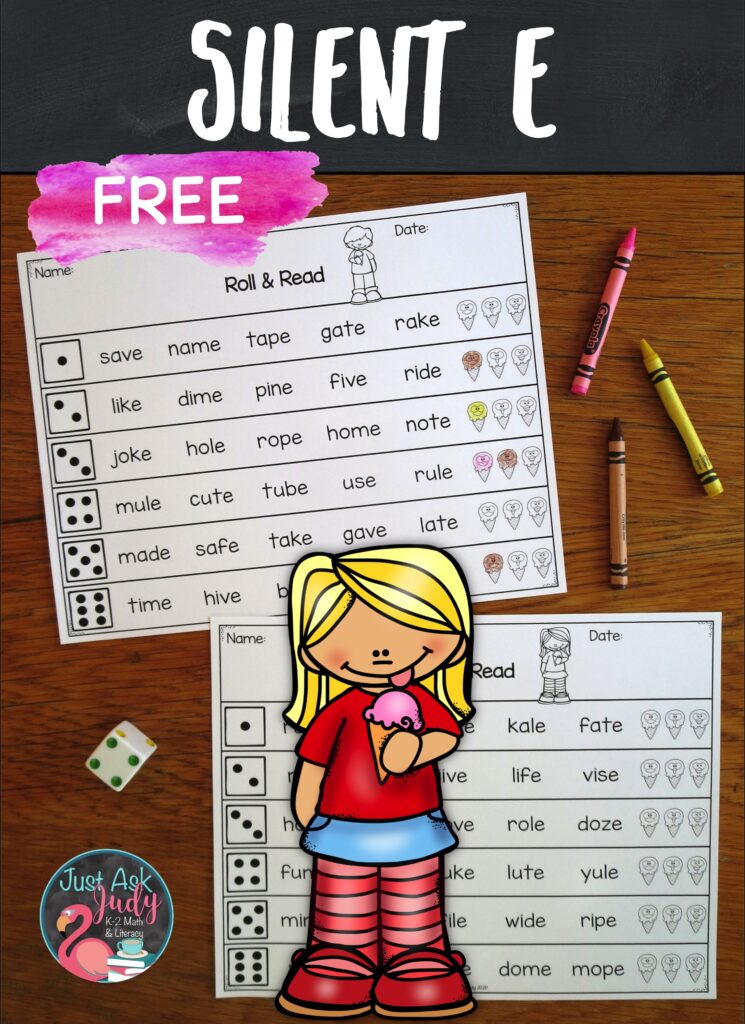 Select the page(s) with the words you’d like your students to read. Print one copy for each participating student.

Students can consume the paper or you can place them in a dry erase pocket to reuse.

Roll the die. Find the corresponding number on your paper. Read the row of words. Color one ice cream cone. 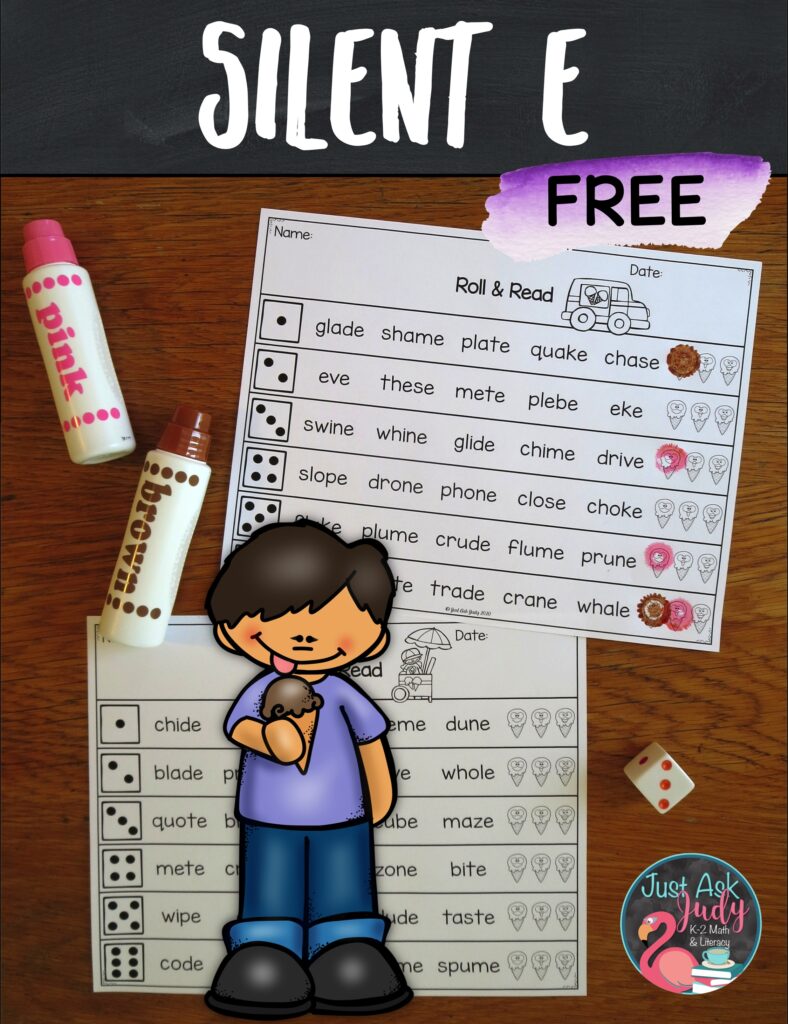 Continue playing until you have read each row at least one time, or one row three times, or your time is up, etc. Anything goes!

Integrate New Learning With the Old

Once your students can successfully decode silent e words, you’ll want to make sure they can discriminate between the two familiar vowel patterns, VC and VCe. A letter-sound mat (see above) is a handy tool at this point.

Try my easy to prepare Systematic and Sequential Phonetic Word Lists Step 2. They are an engaging way for first and second-grade students to apply their decoding skills and to develop fluency in reading one-syllable words with the short vowel, silent e, and long vowel team patterns. 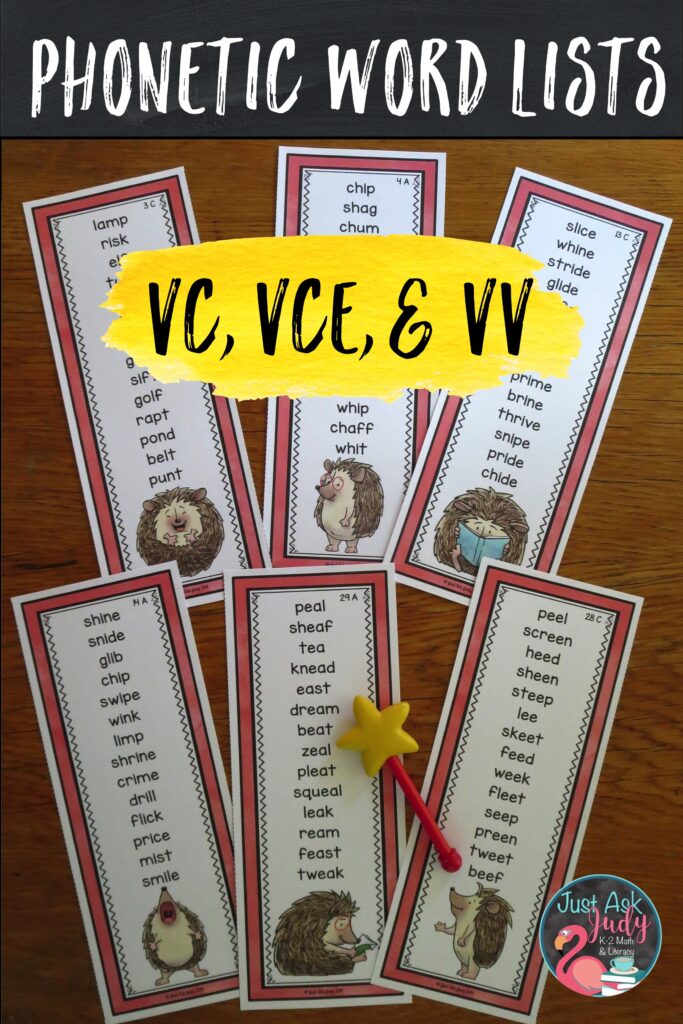 This is a comprehensive, step-by-step resource that can be individualized for your guided reading, intervention, and resource groups or for tutoring sessions.

This resource is now available in either a superhero or an adorable hedgehog theme.

I hope you found some ideas and resources to help you teach the vowel-consonant-e pattern! Let me know which ones were effective for your students.

The porcupine photo in the title image is by Nick Fox.